Every year Classic Sailing has a small number of voyages to the remote archipelago of St Kilda. This remote island group lies 41 miles out into the Atlantic Ocean from Benbecula in the Outer Hebrides, and the anchorage is not always sheltered. This makes any expedition to St Kilda very weather dependent, but if you do land it is a magical place, well worth the effort of arriving there under sail. Over the years we have found our voyages heading to St Kilda have been 80% successful otherwise we would not offer voyages to these amazing islands.

Any sailing voyage aiming to reach St Kilda will have to reach the Outer Hebrides first, so you have an island chain of staggering wild beauty to explore on route. These sailing voyages are adventurous expeditions leading to uninhabited islands, sparsely inhabited islands, tiny fishing villages, deep lochs and rugged cliffs that will be appealing to nature lovers and sailors alike.

Why we love St Kilda

St Kilda as a Sailing Destination

Originally settled by humans between four and five thousand years ago, St Kilda’s distance from the rest of the Outer Hebrides allowed for the development of a unique style of self-sufficient island life, that remained much preserved until the archipelago’s eventual abandonment in 1930.

At the beginning of the previous century the St. Kildians lived exceptionally primitive lives compared to the rest of Europe. They lived of a few sheep, the agriculture and especially of bird catching. Annually a ship with necessities such as knifes, needles and yarn came to the island. These goods were exchanged for dried puffins and other birds and tweed woven from the island Soay sheep.

Tens of thousands of birds were caught every year, especially Auks, Northern Fulmars and Northern Gannets. For food they would make dangerous climbing expeditions to catch the birds and there eggs on the incredibly steep cliffs; especially on the island sea stacks of Boreray, Stack and Stack Armin.

One hundred and eighty people lived on the islands towards the end of the 17th century but they only had 16ft boats as transport. There was not enough timber to build their own larger craft so these tiny boats regularly crossed to the Outer Hebrides and on to the mainland – a passage of the eighty miles in an open boat.

The St. Kildians lived in houses with walls made of boulders and roofs made of turf and hay. The earliest houses had no chimneys or windows and they must have been very damp, dark and dingy to live in. In the 1830’s wood and glass were introduced into new dwellings and the old houses became stables and stores. The old feudal Celtic community of St. Kilda was gradually destroyed by the influence the Anglo Saxons from the mainland but the morning “Parliament” persisted. Every morning the men folk would meet on the Village Street and decide what had to be done that day and who would do it.

Strict Christianity had always been part of life on St Kilda and they also were responsible for the education of the children. At the start of the 20th century stone houses with sanitary facilities were introduced and an attempt was made with charity and tourism to keep the islands going; the main aim of which was to get them enough food to live on. But still the inhabitants were poverty stricken and near to starvation most of the time so that on August 29th 1930 the British government removed the last 39 inhabitants.

In 1957 the National Trust for Scotland became the owner and made St. Kilda a nature reserve. In 1986 St. Kilda became a UNESCO World Heritage Site.

In recent years the National Trust for Scotland has restored some of the houses, the church and the school for accommodation and education on the life of St Kilda. Tourism has been encouraged in so far as it does not conflict with preserving the flora, fauna and wild life of the St Kilda Islands.

Twenty species of birds are breeding at St. Kilda, with over a million birds sitting on about 300.000 nests. A quarter of all the Northern Gannets on the Northern Atlantic, about 60.000 pair, are breeding on Boreray and the Stacks.
Atlantic Puffin are the most common seabird in the archipelago; there were once millions of pairs but a declining fish population has dramatically reduced there number.
St Kilda has its own unique St. Kilda Wren, with a slightly bigger beak and a different song; it is estimated that there are 250 breeding pairs and a major sighting for any ornithologist or amateur bird watchers.

Other Scotland: the Hebrides Regions 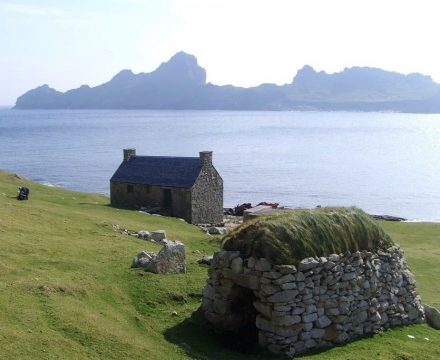