The Full East Coast of England and Scotland

14 nights and around 500 miles of sailing northwards from Harwich.
Where will you go to get there?
Northward, and ever northward. With good time available there are lots and lots of options. The deciding factor will be the skipper’s constant adjustment of itinerary according to the wind over the course of the voyage. You can imagine that Trinovante will sail northward at every possible opportunity. It is better to arrive early and enjoy some time exploring Orkney than getting there at the last possible moment.
Treat it as a Big Adventure and you will have a great voyage!

Getting into the rhythm of sailing and watch keeping.

Seeing the UK coast from a whole new perspective.

Learning the ropes from a friendly and welcoming crew, and becoming a real part of the team for your two weeks on board.

This voyage may involve up to five days at sea where you will be part of a watch system the whole time you are on passage to Orkney. The voyage is expected to take 3 or 4 days. For more information about what to expect read the full voyage description below. 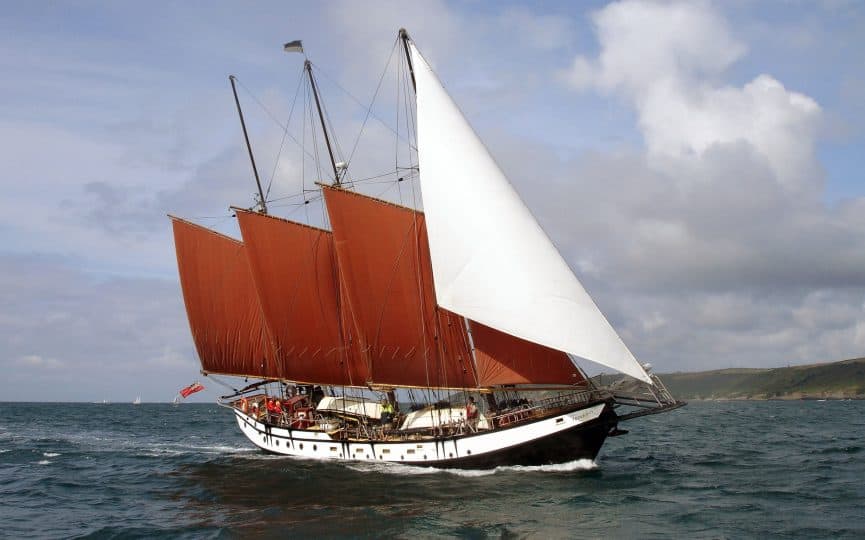 THE VOYAGE TO ORKNEY

You join Trinovante in the historic seaport of Harwich Essex.

From here Kirkwall is just over 500 miles north. Our ideal plan would be to sail straight to Orkney and once up there spend the rest of the time cruising the islands. However, the wind does not always blow in the right direction so a realistic expectation for this voyage would be to plan on a week to get there and a week sailing in Orkney. So…

If the wind is in the right direction we might set sail straight away and not stop until we get to Orkney which would mean three or four nights at sea.

Whitby, Hartlepool, Eyemouth, and Wick are likely places for us to visit along the way if we want to break en-route.

If the wind is against us we might spend a couple of days sailing on the Thames Estuary rivers before sailing north.

Be prepared for any sailing plan that gets Trinovante to Kirkwall on time!

WHAT TO EXPECT FROM BEING AT SEA ON TRINOVANTE

The watch system we set on Trinovante depends on the weather, the number of crew on board, and their capabilities. Normally we run two watches.

Trinovante does not have an autohelm so the crew usually takes it in turns to do half an hour at the wheel. Keeping a lookout and occasional sail handling fill the rest of the time. Trinovante only takes a small number of guest sailors which means you are guaranteed plenty of time at the helm.

There will also be time to watch the stars at night, enjoy sunsets and sunrises, and generally get into the rhythm of being at sea.

Usually, there is a bit of a buzz on board at the end of a voyage. We think that comes from everyone feeling part of a team that has achieved something together.

SAILING IN ORKNEY if time allows.
It is possible we will sail round to Stromness and into Scapa Flow on this leg or we might head North to visit Westray, Stronsay, and Shapinsay .

There could be a mix of visiting remote island communities, anchoring in out-of-the-way places, and some time exploring wild places ashore. Bring some decent walking shoes.

Trinovante finishes this voyage in Kirkwall Harbour which has good travel links.

Kirkwall was established by the Vikings in the 11th Century and first mentioned in the Orkneyinga Viking Saga (also called the History of the Earls of Orkney). We have a copy on board for those who fancy a topical read.

It is well worth staying a few extra days in Kirkwall if you can. There are lots of day trips worth doing from Kirkwall including several stone circles and two sites run by Historic Scotland