St Kilda is a wonderful archipelago of islands and one of Scotland’s remotest treasures. It is a world heritage site 35 nautical miles west of Uist. The main island was inhabited until 1930 and clues to the St Kilda way of life still remain, carefully maintained by the National Trust for Scotland.
There is a huge gannet colony and even more puffins.
St Kilda is remote, you can feel the sense of isolation the past inhabitants lived with all their lives.
In summer, with clear skies and a soft breeze, even a night time sail to St Kilda is utterly magical.

Keen to see how people lived in the old days, they weren’t all good. Watch the Gannets as they circle their huge colonies and dive into the cold green sea.

If you are looking for remoteness then you can’t get any further away from the mainland if you tried. 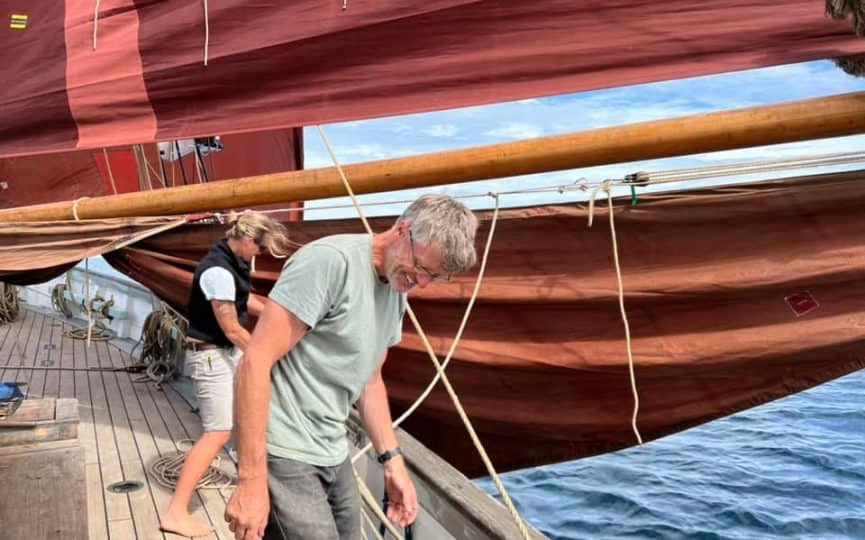 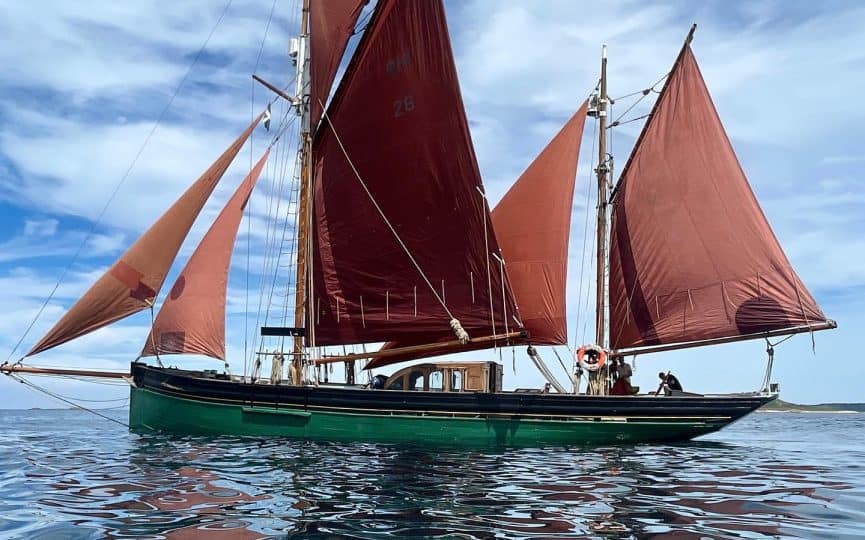 Joining the ship in Oban, the unofficial capital of the West Highlands, makes transport as easy as possible. There are good rail links and some of the most glorious landscapes to pass through en route. Standard joining time for Provident is 2pm, so it may we worth arriving the day before and spending some time in Oban, with its stunning views.

Once on board you’ll enjoy a familiarisation from the crew before setting sail. It is only a few miles of open water before you are sailing in the Sound of Mull which has high mountains on either side and mostly flat water.

There are some stunning anchorages on the Atlantic side if conditions allow. Look out for otters and sea eagles, the perfect way to wrap up your first day on board!

Your destination, St Kilda, is an extraordinary island and inhabited until 29th August 1930 when the 36 islanders were evacuated to the mainland.

Any sailing voyage aiming to reach St Kilda will have to reach the Outer Hebrides first, so you have an island chain of staggering wild beauty to explore en route. These sailing voyages are adventurous expeditions leading to uninhabited islands, sparsely inhabited islands, tiny fishing villages, deep lochs and rugged cliffs that will be appealing to nature lovers and sailors alike.

Why we love St Kilda

St Kilda as a Sailing Destination

Originally settled by humans between four and five thousand years ago, St Kilda’s distance from the rest of the Outer Hebrides allowed for the development of a unique style of self-sufficient island life, that remained much preserved until the archipelago’s eventual abandonment in 1930.

Tens of thousands of birds were caught every year, especially Auks, Northern Fulmars and Northern Gannets. For food they would make dangerous climbing expeditions to catch the birds and their eggs on the incredibly steep cliffs; especially on the island sea stacks of Boreray, Stack and Stack Armin.

By late summer the young birds are learning to fly and fend for themselves.

One hundred and eighty people lived on the islands towards the end of the 17th century but they only had 16ft boats as transport. There was not enough timber to build their own larger craft so these tiny boats regularly crossed to the Outer Hebrides and on to the mainland – a passage of the eighty miles in an open boat.

The St. Kildans lived in houses with walls made of boulders and roofs made of turf and hay. The earliest houses had no chimneys or windows and they must have been very damp, dark and dingy to live in. In the 1830’s wood and glass were introduced into new dwellings and the old houses became stables and stores. The old feudal Celtic community of St. Kilda was gradually destroyed by the influence the Anglo Saxons from the mainland but the morning “Parliament” persisted. Every morning the men folk would meet on the Village Street and decide what had to be done that day and who would do it.

Strict Christianity had always been part of life on St Kilda and they also were responsible for the education of the children. At the start of the 20th century stone houses with sanitary facilities were introduced and an attempt was made with charity and tourism to keep the islands going; the main aim of which was to get them enough food to live on. But still the inhabitants were poverty stricken and near to starvation most of the time so that on August 29th 1930 the British government removed the last 39 inhabitants.

In 1957 the National Trust for Scotland became the owner and made St. Kilda a nature reserve. In 1986 St. Kilda became a UNESCO World Heritage Site.

In recent years the National Trust for Scotland has restored some of the houses, the church and the school for accommodation and education on the life of St Kilda. Tourism has been encouraged in so far as it does not conflict with preserving the flora, fauna and wild life of the St Kilda Islands.

Other Wonderful Places you could get to

Thirty miles off the North West coast of Scotland lie the Outer Hebrides, an idyllic chain of over 40 islands that offers spectacular coastline, stunning mountain scenery, abundant wildlife and a rich and vibrant culture. Each holds its own individual charm and rich history. The Atlantic facing coast is home to some of the finest white sandy beaches while the east coast is deeply indented with a maze of impressive lochs and anchorages.

Sitting at the southern end of the Island chain of the Outer Hebrides, Barra and Vatersay offer an exciting mix of contrasting island experiences with something on offer for every. Feel the strong sense of community created by crofters and seafarers who live side by side on these isolated islands.

Understand the importance of past on present with visits to sites such as the iconic Kisimul Castle at Castlebay on Barra or the deserted village of Eoradail on Vatersay and listen to the lessons that history has taught these Outer Hebridean islands, allowing them to adapt their existence and survive across the centuries.

View the Barra seals at Seal Bay for a stunning snapshot of the islands natural heritage or stroll amongst the wildflowers on the Vatersay machair to truly understand the allure of Outer Hebridean isolation.

ISLES OF SOUTH UIST AND ERISKAY

Experience some of the best that the islands’ outdoors has to offer at Loch Druidibeg on the West Side of South Uist. Here fans of horticulture can explore the abundance of plant life, while ornithologists can find ample opportunities for birdwatching, with chances to spot species such as redshank, dunlin, lapwing and greylag geese.

Explore the heights of the Hebrides on South Uists East Side, where hillwalking opportunities include the peaks of Hecla, Beinn Mhor, Beinn Corradale and Ben Kenneth, with gentler trails available at ground level for those wishing to explore without the exertion!

Follow in the footsteps of South Uist’s first settlers with a trip to the island’s South End, where Hebridean hospitality awaits on the shores that welcomed early incomers to the area, or cross to the connected Isle of Eriskay to learn more about these island people’s audacious endeavours.

Immerse yourself in this area’s inspirational offerings as you tour the East Side of North Uist, where art and environment come together in a uniquely Hebridean harmony and attractions such as the Hut of the Shadows installation or Taigh Chearsabhagh Arts Centre provide the perfect starting point for your journey of discovery, or head for the island’s West Side to discover the wonders of the wild at the Balranald RSPB reserve and the many beautiful Atlantic beaches.

Gaze out across the endless blue ocean to the abandoned islands of St Kilda and feel the pride in these islands’ past which is carried forward by those who remain here in the present; marvel at the achievements of these close communities in the face of adversity with landmarks such as Scolpaig Tower and the Committee Road standing as testament to their tenacity.

The outer Hebridean island of Harris is one that has offered inspiration for generations. With its rich traditions, stunning shifting scenery and strong sense of community. Harris offers a unique introduction to island life on the edge. Visit the village of Tarbert, home to the Harris Tweed Shop and the recently opened Isle of Harris Distillery.

Gaze out across the West Harris sands to the famous uninhabited Castaway island of Taransay and experience a glimpse of the isolation from which the proud self-sufficent communities of the Outer Hebrides were born, or tour the adjoining Isle of Scalpay with its strong seafaring connections to understand more about the symbiosis of islanders and ocean.

The largest of the Outer Hebrides, Lewis offers amazing opportunities to explore all the elements life on the edge in the Atlantic Ocean – with history, heritage, wilderness, wildlife, arts and crafts.

See the ancient Callanish Standing Stones rising from the Lewis landscape to give an imposing outline against the endless island skies and hear the echoes of the past murmuring round these monoliths – an eternal testament to islanders enduring spirit and ingenuity.

Explore the sea caves and stacks at Garry Beach to better understand how the relentless seas have shaped the island environment and the lifestyles of those who live here.

Mostly flat seas between the islands with some more exposed dashes or longer sails in open water to St Kilda and to the Outer Hebrides. Expect a real mixture of conditions, as things can change quickly, but the crew are incredibly knowledgeable and familiar with all the sheltered anchorages and hiding places around the islands. The itinerary is kept loose to make the most of the conditions at the time, and the focus is on enjoyment, rather than ticking off any particular destinations.

Whether you are an experienced sailor or a complete beginner, the professional crew will train you to be guest crew from the moment you arrive, with the intention that everybody works together to sail the ship. The common thread to all Classic Sailing holidays is ‘Hands on’ participation on ships that use ropes, blocks and tackles and ‘people power’ to set sail.

SAILING STYLE & LIFE ON BOARD

We cater for a wide range of ages and physical abilities and how much you are expected to do varies a bit between vessels. See the vessel tab above which explains all about the ‘sailing style’ and what to expect in terms of hands on participation. There is a lot of information about day to day life, the ships facilities and accommodation on the vessel pages.

Every customer sailing with us will need to fill in basic medical questions on their booking application. If you are not sure if your current level of fitness and agility are up to a voyage, then please ring the Classic Sailing Office on 01326 53 1234 and we can chat through your concerns and possibly find options that might suit you better.

For joining your vessel in Oban, the North Pier in the map shown below will be the best place to meet the crew. Your vessel will either be tied up alongside the wall, or out at anchor. Make sure you take a note of the ship’s number found in your confirmation in case of any problems on the day.

What is Not Included:

N.B. BOATS HAVE LIMITED STORAGE SPACE SO PLEASE LIMIT YOURSELF TO ONE SOFT BAG OR RUCKSACK  (NOT SUITCASES)